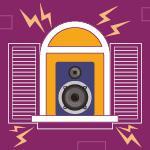 When looking for a new home, people always consider things such as house prices, living costs, and crime stats, but don’t necessarily think about who the next door neighbours will be.

Having a noisy neighbour is many UK homeowners’ worst nightmare, so it’s crucial that you do your research into the area before deciding to move in.

In order to help you out, we have taken a look into which UK cities and towns have had the most noise complaints filed in the last five years (2017-2021). To do this, Freedom of Information requests were sent to 49 local councils requesting the total number of noise complaints, as well as yearly and monthly breakdowns.

Belfast had the most noise complaints

The results were interesting, as it was the Northern Irish capital city of Belfast that topped the overall charts with the most noise complaints. The local Belfast City Council received 31,305 noise complaints in the five-year period between 2017 and 2021, which was 4,023 more than Manchester in second.

Belfast is the 15th largest city in the United Kingdom, with a population of 295,000. Those looking to move to Belfast may benefit from soundproofing their homes or even consider quieter towns outside of the metropolitan area, such as Holywood or Carnmoney.

Manchester council recorded 27,282 overall complaints and thus had the noisiest neighbours of any English city or town. Rounding out the overall top three and scoring the highest of any Scottish city was Aberdeen, totalling 22,349 noise complaints in the last five years.

Swindon had the least noise complaints

On the other end of the scale, it’s interesting to look into which UK cities and towns were the quietest. If you’re looking for somewhere to live for a more peaceful life, the data suggests that Swindon may be the best place to go. The Wiltshire town had a tiny total of just 1,630 noise complaints in the last five years, 608 less than the next lowest.

We head over to the north west of England for second place, with Wigan in Greater Manchester totalling 2,238 complaints. Rounding out the top three quietest towns and cities was Norwich in Norfolk, with the local council only reporting 2,554 noise grievances since 2017.

Although Manchester was the noisiest of all English areas that replied to our FOI requests, four places in north west England made the top 10 quietest areas in the UK list. In addition to the aforementioned Wigan, Blackburn (2,731), Warrington (4,152) and Bolton (4,950) also featured.

Due to the nature of the pandemic, we thought it would be interesting to review whether there were more noise complaints overall in the UK after 2020 or before.

Obviously, more people than ever before were spending more time at home in 2020 and 2021 as our way of life was drastically changed. With that being said, there were restrictions on people gathering and therefore fewer opportunities for neighbours to be disrupted by garden parties, loud music and the like.

Having combined the data for the 38 local councils that split their numbers across all five years as per the request, we found that 2021 was the year with the most noise complaints overall.

It’s interesting to note that 2021 topped the charts with 82,046 noise complaints, as it was a year that started with restrictions advising people to stay at home, and ended with restrictions being lifted and people returning to a more ‘normal’ life.

Though 2021 was the noisiest, 2020 was only 605 complaints behind in second place. With the country essentially shut down and with nothing to do, we can only assume that people were bored at home and neighbours up and down the land were easily agitated.

The three years before the pandemic averaged at around 75,000 noise complaints, much less than the two years after. This suggests that more people spending increased time at home leads to annoyed homeowners reporting loud and disruptive neighbours to their local council.

July is the noisiest month of the year, on average

31 local councils responded to our FOI request with a breakdown of monthly data. We then added up each month’s totals from each of the five years (2017, 2018, 2019, 2020, 2021) to find out exactly when most acoustic grievances were reported.

The summer months often evoke happy memories, with social occasions such as street parties and garden DJ sets taking place, but the data suggests that not everyone is happy with this. The chances are, you’re probably annoying your neighbours in some way during the summer months, as these are when the local councils receive the most noise complaints.

July took the top spot for the total number of complaints with 35,900, which was 2,955 more than June which was the next highest (32,945). August was, rather unsurprisingly, third on the list with 32,660 total complaints from the 31 local councils.

It’s fair to say then that when the sun comes out, the council’s email inbox gets a bit more full. The majority of these noise complaints will be from loud music, mass gatherings or parties in gardens, children playing in the street, dogs barking, over-the-top car engines, loud lawnmowers and more. A more recent reason for disruptive noise comes from flyable drones, which are often used in the summer to capture photos and videos of scenic areas.

UK homeowners are kind to their neighbours over the festive period

December was by far the lowest of all 12 months, with just 18,959 from the 31 local councils that broke their data down into months. This is almost half that of the number of complaints that were filed in July, showing that unwanted noises are much less common during the winter.

Soundproofing your home can help prevent unwanted issues with your neighbours, and can be done by installing the relevant acoustic insulation into your home.

This lowers the intrusion of external noise while also preventing noise from escaping your home and annoying your neighbours. In recent years, it’s become a lot more common for people to add acoustic insulation to certain rooms, in response to neighbours or street noise from traffic.

You can follow our guide on how to soundproof a house, as well as how to deal with a noisy neighbour.

For the purposes of this study, we sent Freedom of Information requests to 49 local councils in the UK, decided by population, requesting the number of noise complaints that were reported to them for the five year period of 2017 to 2021 (1st Jan 2017 to 1st Jan 2022).

Some councils may have different ways of recording noise complaints which should be taken into account when directly comparing the results.