Streets Named After Famous People in the UK 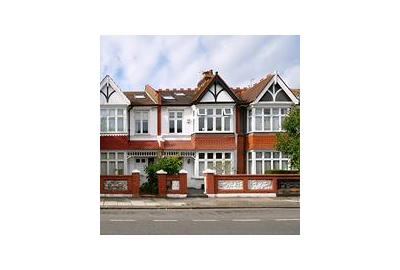 When looking into street names in the UK, there are plenty of High Street, Station Road and Church Lane examples in pretty much every town or city you pass through. But what about those streets and avenues that have a bit of history to their name?

There are hundreds of UK streets that have been named after famous people, and Insulation Express are here to take a look at the effect that links to famous people have on the valuation of houses.

We’ve compared the average values of houses on streets linked to big names to those on neighbouring streets in the same postcode to see if there’s an increase or decrease in value.

10 Famous Names That Increase House Prices The Most

The top 10 list is a unique look at both ancient and recent history in the UK, featuring authors, political activists, band members, and royals. 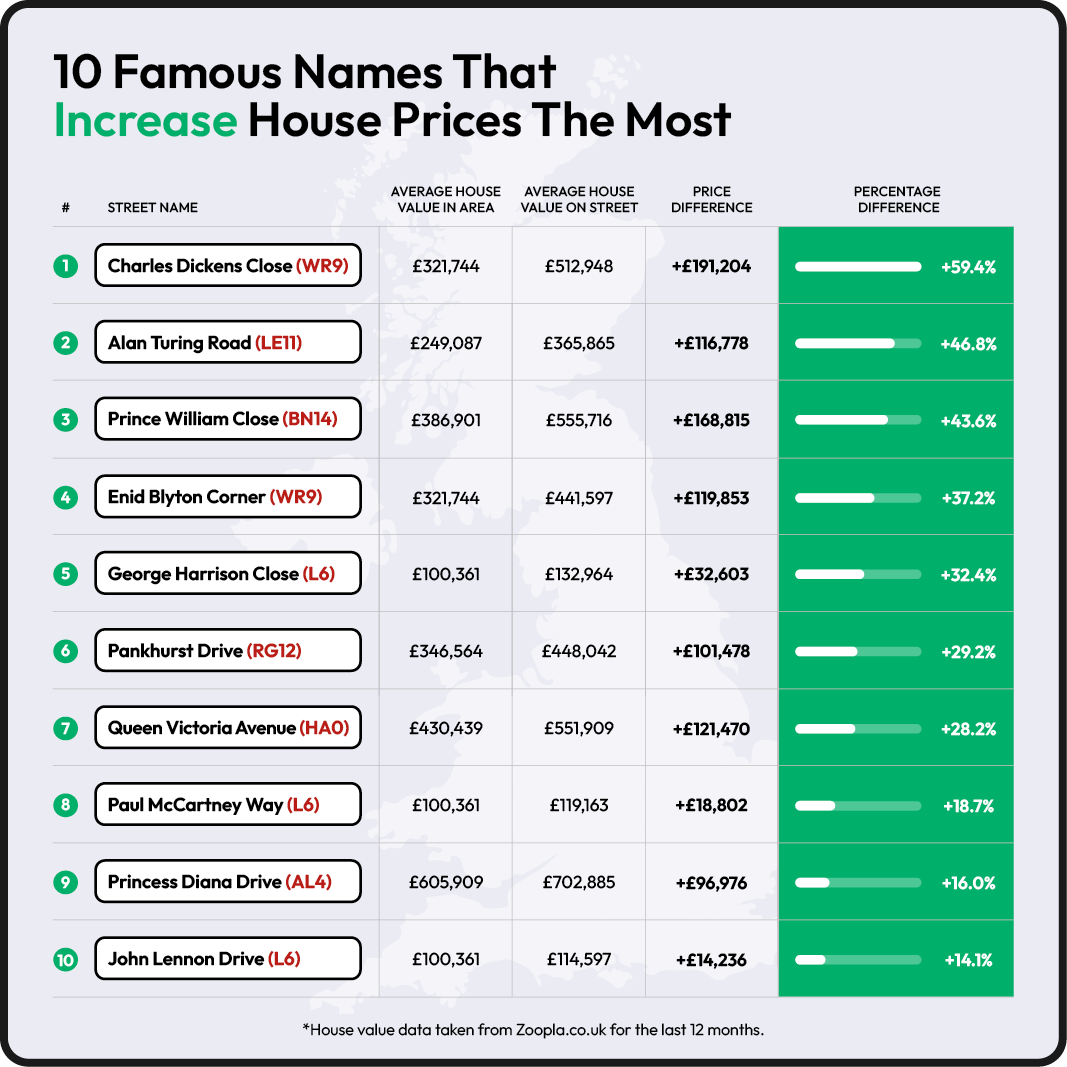 Taking the number one spot is Charles Dickens Close in Droitwich, whose average house value of £512,948 is 59.4% higher than the average in neighbouring streets in WR9. The author of Oliver Twist and Great Expectations was far clear of 2nd place, 13% ahead of Alan Turing Road in Loughborough, which had a huge percentage difference of 46.8%. The street named after the computer scientist, mathematician, and Enigma code breaker during World War II has an average house value of £365,865 compared to £249,087 in the rest of LE11.

In 3rd place is the highest rated Royal on the list, Prince William Close in Worthing. Remaining as a popular figure amongst many Brits, the average value of homes on the street is £555,716, which is a 43.6% increase of the surrounding streets in BN14, with a value of £386,901.  Close by to Charles Dickens Close in Droitwich is another popular author-related street, in the form of Enid Blyton Close, which is 37.2% more valuable than nearby areas.

Three of The Beatles make the top 10 list thanks to their streets in the L6 area of Liverpool, with George Harrison Close being the most valuable at a 32.4% increase. Paul McCarney Way is in 8th, at an 18.7% increase, with John Lennon Drive rounding off the top 10 at a 14.1% increase. Ringo Starr was the only Beatle to miss out on the BBC’s 100 Greatest Britons list, and the Thomas The Tank Engine narrator also just missed out on our top 10.

10 Famous Names That Decrease House Prices The Most

It’s not all sugar and rainbows for people that live on streets named after famous people in the UK, as some actually have much lower average house price values than their neighbouring streets that have standard names.

Here are the 10 famous named streets that have actually decreased the value of the properties on it. 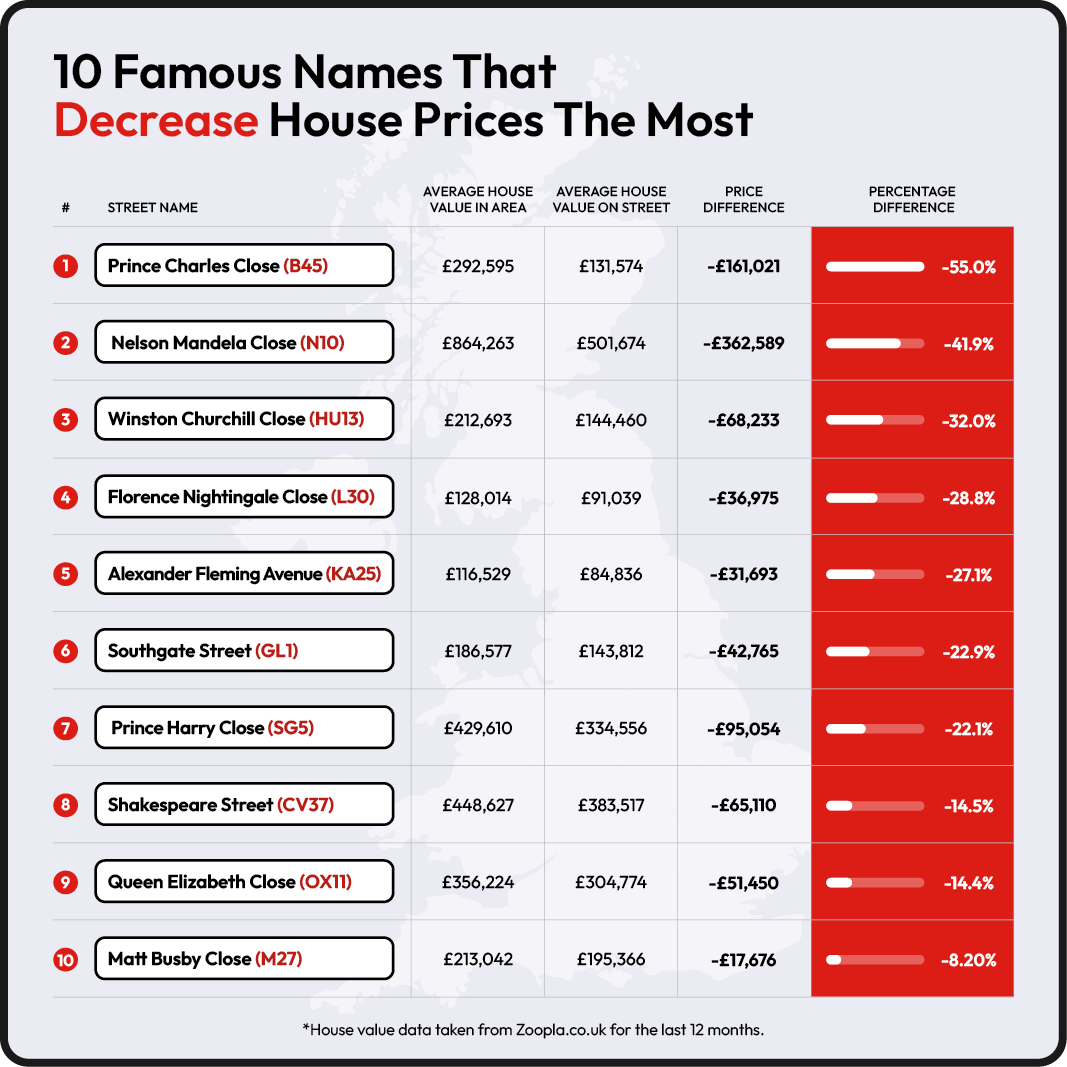 Many of the biggest decreases are related to popular historical figures, as Nelson Mandela, Winston Churchill, Florence Nightingale, Alexander Fleming, William Shakespeare, and Isaac Newton all feature. Gareth Southgate may have led England to the Euro 2020 final, but his street in Gloucester is 22.9% (-£42,765) less valuable than its neighbours.

Some Names Have Little Effect on Property Prices

Even though he helped them win the Premier League title against all odds, houses on Alan Shearer Way in Blackburn are worth 0.1% less than the average value in the town. Jane Austen may be well renowned as one of Britain’s greatest ever novel writers with timeless classics such as Pride and Prejudice and Emma, but Jane Austen Close in her home county of Hampshire has an average property value that’s 0.3% less than the rest in the GU35 postcode.

Some names have still had a positive impact on property values, but just missed out on our top 10. Charles Darwin’s contribution to the science of evolution is one of the greatest breakthroughs in human history, but adding his name to Charles Darwin Road in Plymouth only raised the house prices by 3.9% when compared to other streets in PL1.

When judging our research by the types of people the streets are named after, areas named after royals saw a £13k increase on average. Prince William is the most popular name, increasing house values by £168,815 when compared with neighbouring streets. Prince Charles is not so popular, reducing the value of houses on Prince Charles Close in Birmingham by £161,021. The Queen has a few streets named after her, but houses on Queen Elizabeth Close in Didcot are worth £51,450 less compared to other streets in OX11.

Liverpool is a city that is full of heart and soul, with a musical past that draws visitors from all corners of the globe. The most famous sons of Merseyside each have a street named after them in the city, and it turns out that being associated with the Beatles increases house values by £18k. George Harrison, somewhat surprisingly, has the highest value of The Beatles, increasing prices by £32k compared to other homes in the L6 postcode. Paul McCartney Way is the next best, increasing values by £18k. Then comes John Lennon Drive at an increase of £14k while poor Ringo Starr is bottom of The Beatles list, though houses on Ringo Starr Drive are still worth £10k more than homes in the surrounding streets.

Historical Figures and Sportspeople Have a Negative Effect on Value

There are loads of streets named after historical figures in the UK, but overall they have a surprisingly negative effect on the value of houses on their streets overall, reducing prices by £29k on average. Nelson Mandela Close in London has an average house value that’s a huge £362k lower than the surrounding area. Other streets that surprisingly have a negative effect on home values are Winston Churchill Close (-£68k), Florence Nightingale Close (-£36k), Alexander Fleming Avenue (-£31k), and Isaac Newton Way (-£18k).

In our study, sportspeople all have a negative effect on house values, at an average drop of £20k. The recently rechristened Gareth Southgate Street in Gloucester has an average value of £43k less than the surrounding area. Matt Busby is one of Manchester’s true legends for his achievements at Old Trafford, but Matt Busby Close has a £17k lower average value than other streets in the city.

In addition to the impact on the housing market, we were interested in finding out who the British public believed deserved a street named after them. Using the most searched and newsworthy figures of 2021, we surveyed 1000 people to see what they think, with the following results.

With I’m A Celebrity back on our screens, it was popular Geordie duo Ant & Dec that won the poll with 23% of the vote. They’re no stranger to awards, having won 43 National Television Awards (and counting) over the years but having an entire street named after them, presumably in their hometown of Newcastle, would be an even greater honour if it were to ever happen.

Second in the vote was Adele with 19%, whose new album 30 skyrocketed to number one in the charts all around the world. Her ‘An Audience With’ concert also made the headlines thanks to the star-studded crowd, which included Leonardo DiCaprio, Selena Gomez, Drake, Seth Rogan, and more.

David Beckham got 18%, with England’s most famous footballer just missing out on the top spot by a few percent. There was a small drop-down to Gordon Ramsay in fourth with 13%, with Bond actor Daniel Craig only receiving 12%.

We also gave the respondents the option to choose ‘Other’, and they let us know who they were desperate to see get their own street named after them. David Attenborough was unsurprisingly a popular option, getting the most votes all in the Other category.

David Bowie, Captain Tom, and Marcus Rashford all received multiple votes in the survey, with all three deserving in their own ‘way’.