Revealed: Safest Cities In England and Wales According To Crime Data 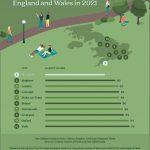 As the UK begins to reopen safely, you may be looking at the housing market for your next move. For many, this will mean a fresh start in a new city. Therefore, we took a look through the important data to determine that Plymouth is the safest major city in England and Wales, judging by eight factors.

These major cities were compared with traditional crime statistics for the first three months of 2021, such as anti-social behaviour, robbery, criminal damage and theft. In addition, we also collated data on the number of security cameras, car accidents, ambulance waiting times, number of doctors and more.

For the purpose of the study, we analysed 25 of the biggest cities in England and Wales, relative to population. 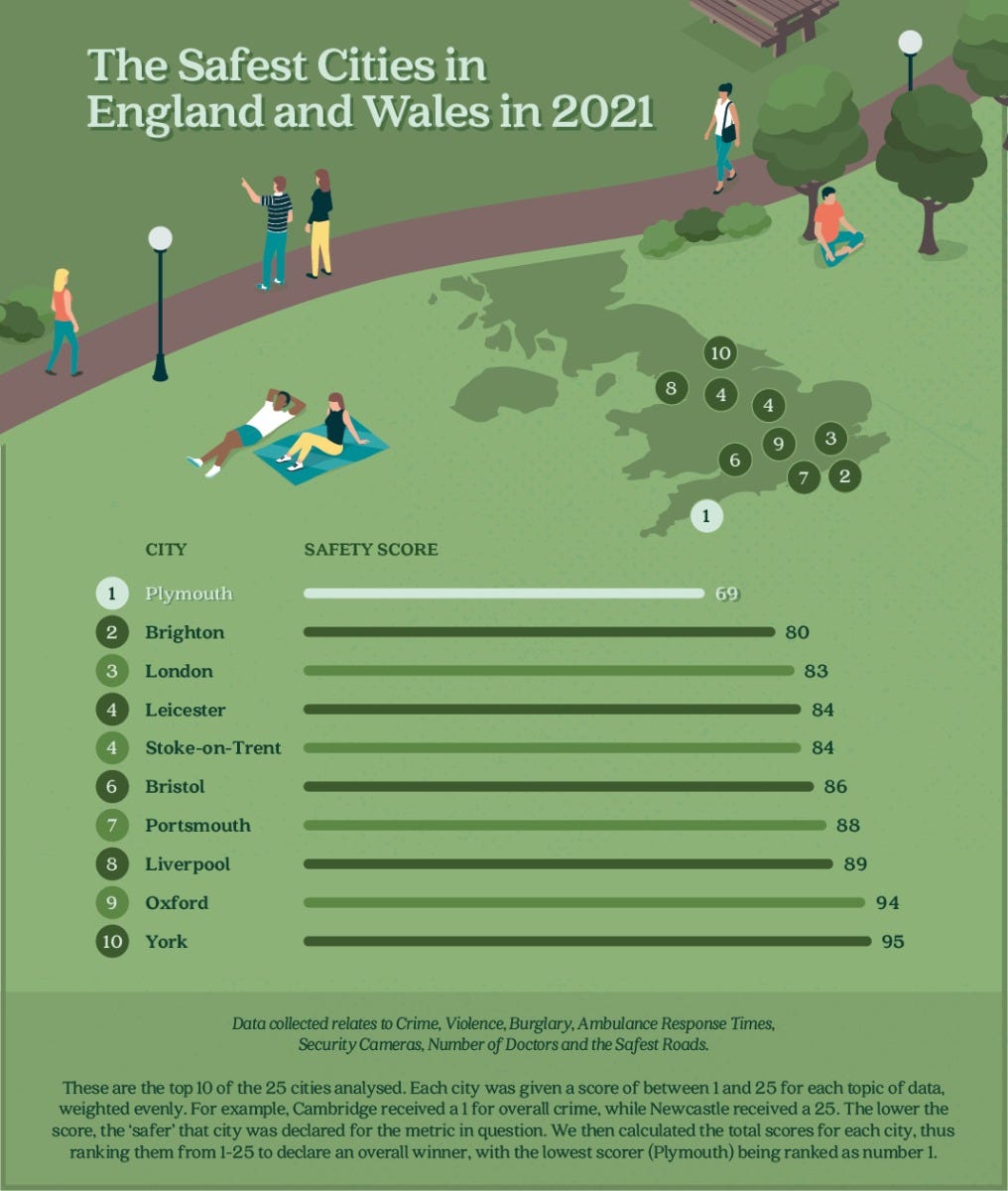 In order to crown the overall safest city in England and Wales, we gave each city a safety score of between 1 and 25 for each topic of data. For example, Cambridge received a 1 for overall crime, while Newcastle received a 25. We then calculated the total scores for each city, thus ranking them from 1-25 to declare an overall winner. The lower the score, the safer the city.

It was from this that Plymouth has been crowned as the safest city in England and Wales, of the cities we analysed. Taking into account all of the below categories including overall crime, ambulance response times, number of doctors and car accidents, Plymouth’s overall score was 69, comfortably finishing ahead of Brighton (80) by 11 points in our scoring system.

London may have a bad reputation in some circles, but all things considered, it is relatively safe under the parameters set here, scoring 83 and taking 3rd spot thanks to its strong performance with the number of doctors and security cameras. Rounding out the top 5 in our safest cities are Leicester and Stoke-on-Trent, each scoring 84 overall.

Safest Cities In England and Wales in 2021

Here is the full list of the 25 cities we analysed, in order of safest to least safe, along with their overall score. The lower the score, the safer the city:

How did each city perform in each category though?

To work out the safest major city in England and Wales according to crime alone, we took the latest police figures for the first few months of 2021 and calculated the crime rates per 1000 people. This particular study includes all reported crimes combined, to give a broad overall picture of the city with the lowest crime rate. Further on in our study, we will look at some more specific crimes in more detail, and the differences we found.

It’s Cambridge that comes out on top here with a low crime rate of 22.6 per 1000 people. The data is an accumulation of all reported crimes, such as anti-social behaviour, robbery, criminal damage, drug-related offences and public order offences.

On the opposite end of our findings, Newcastle (43.9), Derby (41.7) and Nottingham (40.4) had a less than stellar safety record when it comes to overall crime.

Despite the data being recorded during months with some lockdown restrictions, crime figures remain steady proving that crime does indeed never sleep.

Newcastle Are The Quickest To Respond To Life-Threatening Calls

We looked at standard ambulance response times to all callouts and incorporated those in our overall scores, but here we’re focusing on responses to situations that are considered to be ‘life and death’. Paramedics can often be called out for everything from a sore throat to broken bones and serious injuries. If your life is in actual danger, you’ll want to know that the response is going to be quick. So, if you require an ambulance for a life-threatening situation, where are the best cities to be?

Using the existing data, these figures are a percentage of ambulance responses to life-threatening situations in eight minutes or less.

It’s Newcastle that tops the list for responses to life-threatening situations, with an 88.4% response rate in under eight minutes. Keeping up their strong performance across the board, Plymouth ranks in second place with an 85.3% rate. Liverpool also comes out well with a rate of 85.1% responses in less than eight minutes, while Sunderland (84.1%), Brighton (83.6%) and Portsmouth (80.5%) all come in above 80%.

Peace and quiet can lead to a happy life, but which cities are mostly free from anti-social behaviour and violence?  The way we worked out this particular crime rate was simple. We took the data for crimes that were committed in the first three months of 2021 that fell under the Anti-Social Behaviour and Violent categories, then added them together. Then, we calculated the crime rate per 1000 people, relative to each city’s population.

Oxford and Cambridge may be known for their exceptional universities, but they also top this particular list. Oxford’s ASB and violence rate is extremely low at just 10.4, with their old rival not far behind at 11.5. There are a few other cities that also scored incredibly well and have ASB and violence rates below 15, and these are Sheffield (13.6), London (13.6) and Bristol (14.9).

York Locks Down The Title For Least Burglaries

In some areas, locking your door isn’t entirely necessary, while in others, it is most certainly a requirement. Having someone break into your home is a lot of people’s worst nightmare, and understandably so. Thus, we have looked at the cities with the lowest burglary rates per 1000 people in 2021 so far.

Whether you are sitting in the comfort of your own home or are out and about, you want to make sure your property is as secure as possible. A big part of this feeling of safety can come from knowing that your city is one of the lowest for burglaries per 1000 people.

London and Bristol Win Out For The Most Security Cameras

CCTV cameras are present for the protection of yourself and other residents. Which major city has the most security cameras though?

Due to its massive population, it’s no surprise to see that London (1.7 per 1000 people) has the most CCTV cameras, of course, but it’s Bristol that stands out above the rest, relative to population. With a huge 658 overall cameras, which is a rate of 1.5 cameras per 1000 people, Bristol has almost 250 more than the next best in Birmingham (422). Rounding out the top five in our list are Stoke-on-Trent with 384 security cameras and Liverpool with 352.

Though Plymouth stood proudly at the top of our list for the least burglaries per 1000 people, it’s interesting to note that they had the least number of security cameras. The city council will likely argue that there is much less of a need for cameras due to them having such a low overall crime and burglary rate.

Need A Doctor? London’s The Place To Be

Being able to see a doctor within close proximity of your home is a big contributing factor in feeling safe in your area, and the results we obtained are very interesting.  For the purposes of this study, we looked at how many GP surgeries were within a 2-mile radius of the city centre, with a wide scale of different results. The most had a whopping 50 in the space of just 2 miles, while the city at the bottom of the list only had 9 in the same space.

Once again, it’s no real surprise to see London at the top of this list as they can cram a lot of things into a relatively small space, but it’s Leicester who perform particularly well in this category. The East Midlands city has 48 GP surgeries within 2 miles of the city centre, which is 7 more than the 3rd placed cities, Birmingham and Bradford. It’s Leeds that rounds out the top five, with 39 different doctor’s surgeries within 2 miles.

On the other end of the scale, Oxford has a very low number of doctor’s surgeries by comparison, with only 9 near the city centre.

Stoke-on-Trent Has The Safest Roads

Whether you drive or not, a city having safe roads to travel on is paramount to a positive living experience. The data we used for this section was related to city centre data for each of the 25 chosen cities spanning across the last five years. The city with the least city centre crashes in that time, was deemed to have the safest roads.

Stoke-on-Trent wins out in this category with 133 city centre car accidents in the last five years, just ahead of Kingston Upon Hull with 141. Swansea (206), Portsmouth (207) and Sunderland (216) can also be proud of their results here with a relative lack of crashes.

On the other hand, the roads right in the centre of London are famed for being difficult to drive on, which has led to the most collisions overall (1456).

If you’ve made your decision on where you want to move to, how much will it set you back? Brighton tops the list of most expensive cities to live in just ahead of London, but which major city has the cheapest house prices on average according to data in March 2021?

For this study, Insulation Express analysed the following metrics for each of our 25 chosen cities (decided by population) using the noted sources:

To crown the overall safest city in England and Wales, we gave each city a score of between 1 and 25 for each topic of data, with each weighted evenly. For example, Cambridge received a 1 for overall crime, while Newcastle received a 25.  We then calculated the total scores for each city, thus ranking them from 1-25 to declare an overall winner, with the lowest scorer (Plymouth) being ranked as number 1.The lower the score, the ‘safer’ that city was declared for the metric in question.

The House Prices data was not included in the calculations for the overall safest cities, and has only been added as a gauge for people looking to move to these areas.