How Much Are Iconic Horror Movie Homes Really Worth? 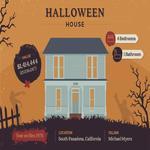 How Much Are Iconic Horror Movie Homes Really Worth?

With spooky season upon us, many of you will be scrolling through Netflix looking for those classic horror movie franchises that we all know and love. Whether it’s ghosts and ghouls, poltergeists, evil clowns, axe murderers, or terrifying monsters, they always catch our eye in the lead-up to Halloween.

One aspect of these movies that are particularly iconic in many cases are the homes that either the main protagonist, or the evil villain, dwells in.

Insulation Express has taken a look at some of the most iconic horror movie homes and researched how much they would actually be worth on the real-life housing market. We spoke to valuation experts at CompareMyMove for these professional valuations, some of which may surprise you.

Based on the chilling true story that is probably even more terrifying than the film itself, this eerie dwelling in Amityville, New York was home to the gruesome crimes of Ronald DeFeo Jr in 1974. Brought to life (for want of a better phrase) on film in 1979 by director Stuart Rosenberg, it mixes the murders with a hair-raising supernatural haunting.

For 2021, realtor.com have estimated the home’s value at $809,100 (£592,669), with an estimated monthly rent of $2,500 (£1,831). Many morbid and curious house hunters may be willing to pay up to own the iconic home. Furthermore, its idyllic location will also draw in buyers, with many people looking to live outside of the cities and purchase larger properties following restrictions as a result of the coronavirus pandemic.

However, the home’s selling history shows that it sells for far less than the listed price, indicating that many are put off by the home’s dark past and rumours of paranormal activity. One of the more modern entrants into the world of petrifying cinema, A Quiet Place sees the family of John Krasinski and Emily Blunt looking to make as little noise as possible, in order to survive the apocalyptic blind monsters who attack using their intense sense of hearing. Due to the nature of the world they’re trying to survive, the family are living in a sparsely populated part of town.

This 1880 5,732 sqft farmhouse featured in A Quiet Place is located in the town of Pawling, in Dutchess County, New York. The property features nine bedrooms, 4.5 bathrooms and sits on 417.37 acres of land.

Little is known about this particular property, other than its vast size and charming surroundings. The neighbourhood median price is $525,000 (£384,565), with an estimated rental price of $3,209 (£2,350). However, it can be expected that this particular property would command a considerably higher price considering its size. According to Zillow, properties in the area have increased by 19.2% in value over the past year. 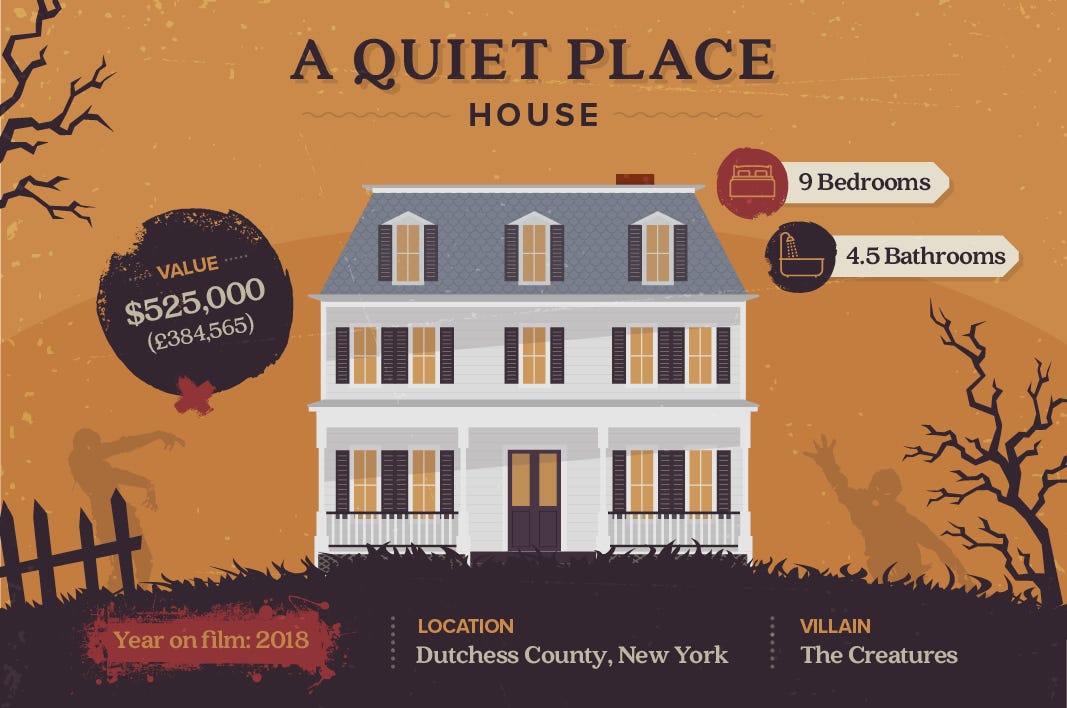 Possibly the most famous horror movie of all time, The Exorcist set off a wave of poltergeist-related films that have brought in millions at the box office. Director William Friedkin produced what many horror fans would describe as a masterpiece, with the plot surrounding a young girl whose family are trying to rescue her from the demon Pazuzu via a Catholic exorcism.

According to Realtor, this 1950s family home is 198% more expensive than nearby properties. Clearly being the set of an iconic horror film has had an impact on the property’s value, with the added bonus that no paranormal activity happened here. The real-life events that inspired the novel and the film actually took place in a house in Missouri. 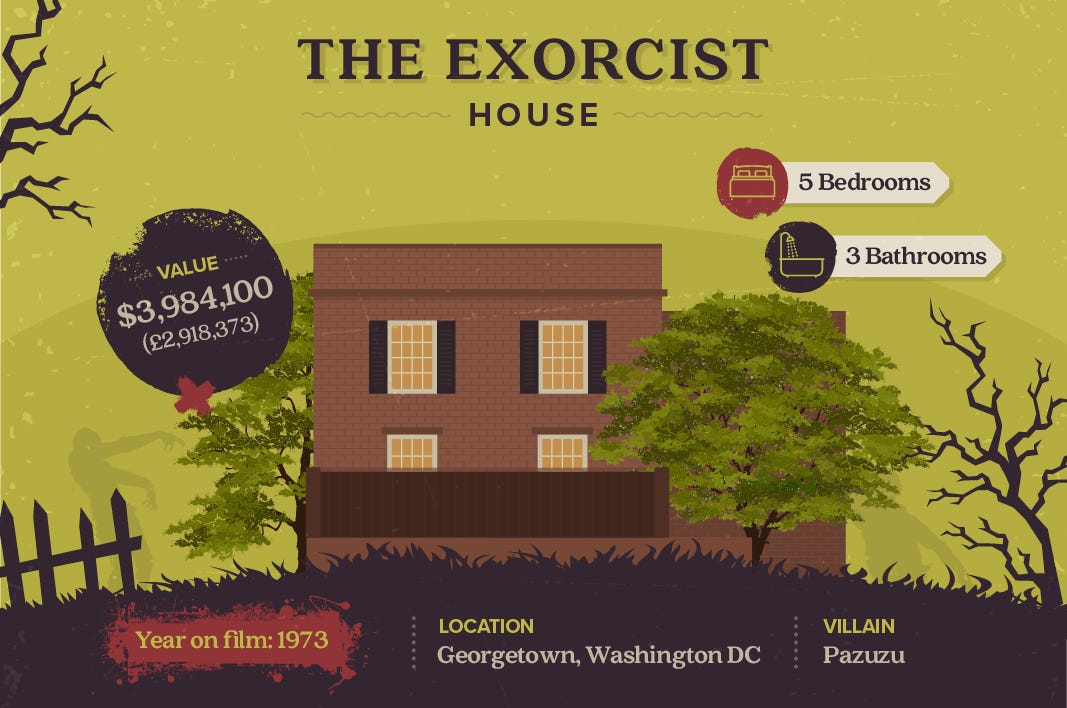 Michael Myers is one of the original serial killers captured on film, with this series actually going a long way to establishing Halloween as its own unique holiday. The classic slasher from 1978 was so successful that it actually spawned 12 sequels too. When you see that soulless white mask, you know it’s time to run.

The iconic 4-bedroom suburban Myers family home in South Pasadena California, as seen in the film, was originally built in 1888 and is preserved as a California Historical Landmark. According to realtor.com, the neighbourhood median price for this area is currently $1,414,444 ($1,036,087).

Reportedly the property is no longer a residential home and is used for private business. Zillow’s rental estimation for the property is $2,704 ($1,980). As only a fictional murder took place on the property, it is unlikely to be a factor in the property value. However, owners and renters of the property should be prepared for many a horror fan making a pilgrimage to the “Myers House” for a photo opportunity. 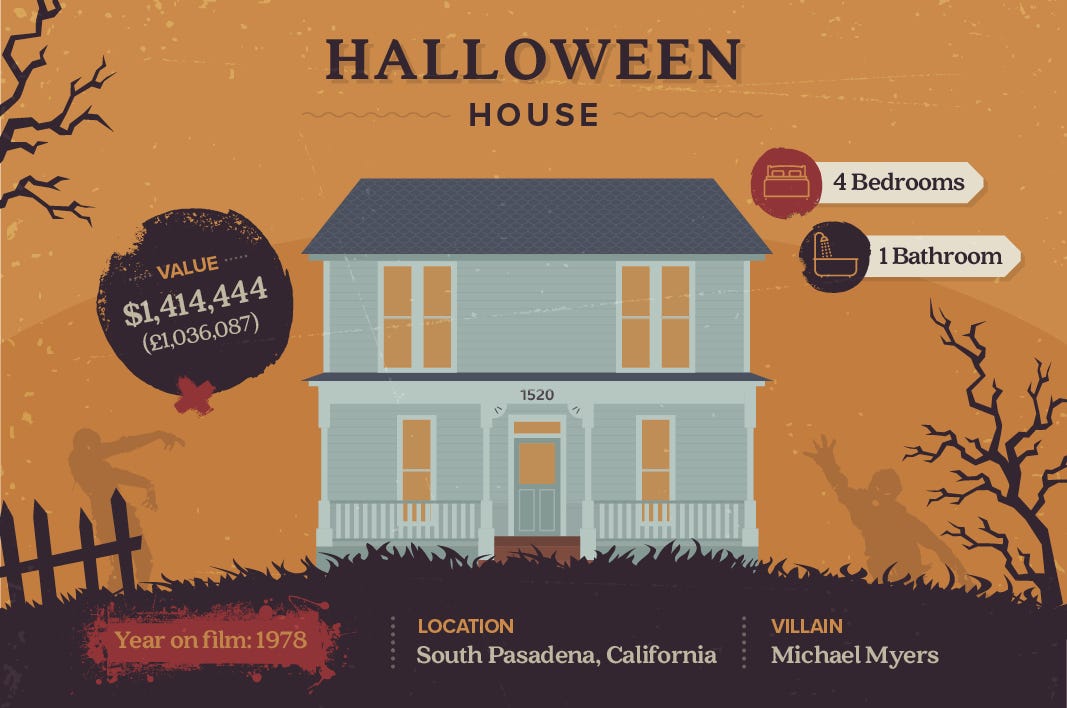 As far as horror movie villains go, none quite strike a nerve with many as much as Pennywise the Dancing Clown. Whether it’s the superb portrayal by Tim Curry or the more modern scare by Bill Skarsgård, even turning on the TV to watch Stephen King’s IT is a daunting task. The house used here is from 2017’s IT Chapter One, where the children of Derry are lured into a large abandoned home.

There have been several proposals and plans for renovation, which will no doubt increase its value. However, to date it remains in a state of disrepair. Nevertheless, the house has become somewhat of a tourist attraction following the release of Stephen King’s ‘It’.

Freddy Krueger, the king of the one-liner in horror blockbusters has been haunting the children of Elm Street’s dreams since 1984. Director Wes Craven and actor Robert Englund brought to life one of the most horrifying villains we’ve ever seen and to this day people still have nightmares, which Freddy will be more than happy to feed on.

As proof of the film’s impact on the value of this 3-bedroom property, Realtor also reports it is 150% more expensive than nearby properties. Furthermore, the house was renovated prior to its last sale and features a pool. The caveat is that although Freddy Kruger may not be a concern, the homeowner will no doubt encounter many film fans wanting a glimpse of the iconic home. Would you be brave enough to look at buying one of these terrifying homes to call it your own? If you are, it’s clear you’ll have to start saving as they’ll not come cheap! The better option may be to just visit them as a tourist…