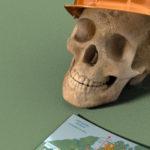 Modern technology has revolutionised many aspects of modern life, including the efficiency and safety of construction sites around the world.

However, it took a long time to reach our current level of health and safety. Here we take a look at some of the most deadly construction sites throughout history. 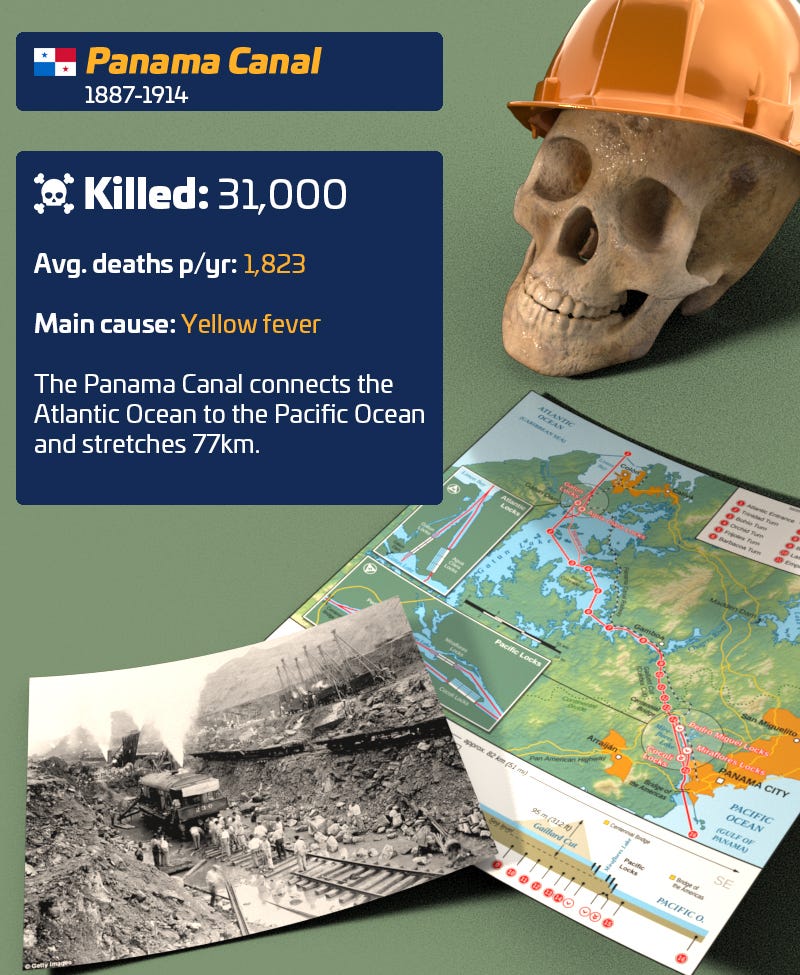 Perhaps one of the best known human construction projects of all time, the Panama Canal, was started by France in 1887. The canal would connect the Atlantic Ocean to the Pacific Ocean and make maritime trade far easier.

Ferdinand de Lessaps was charged with the task of planning and constructing the canal after his success with the Suez Canal. However, De Lesseps only visited the site a few times and the dense jungle and poor working conditions led to over two hundred deaths per month. Attempts to control the outbreak of disease were unsuccessful as it wasn't yet known that mosquitoes were carriers of malaria. An estimated 22,000 workers died during this initial building period.

Work was transferred to a much smaller task force to try and minimise the number of deaths.

The project was then taken over by the USA in 1904. The USA inherited a depleted workforce, damaged equipment and a mammoth task. The work continued and mosquito carried diseases were minimised by the end of construction thanks to the work of Dr. Carlos Finlay and Dr. Walter Reed. Improvements included mosquito nets, improved hygiene and the elimination of stagnant water.

Despite these improvements, another 5,600 workers died during the American completion of the Panama Canal. 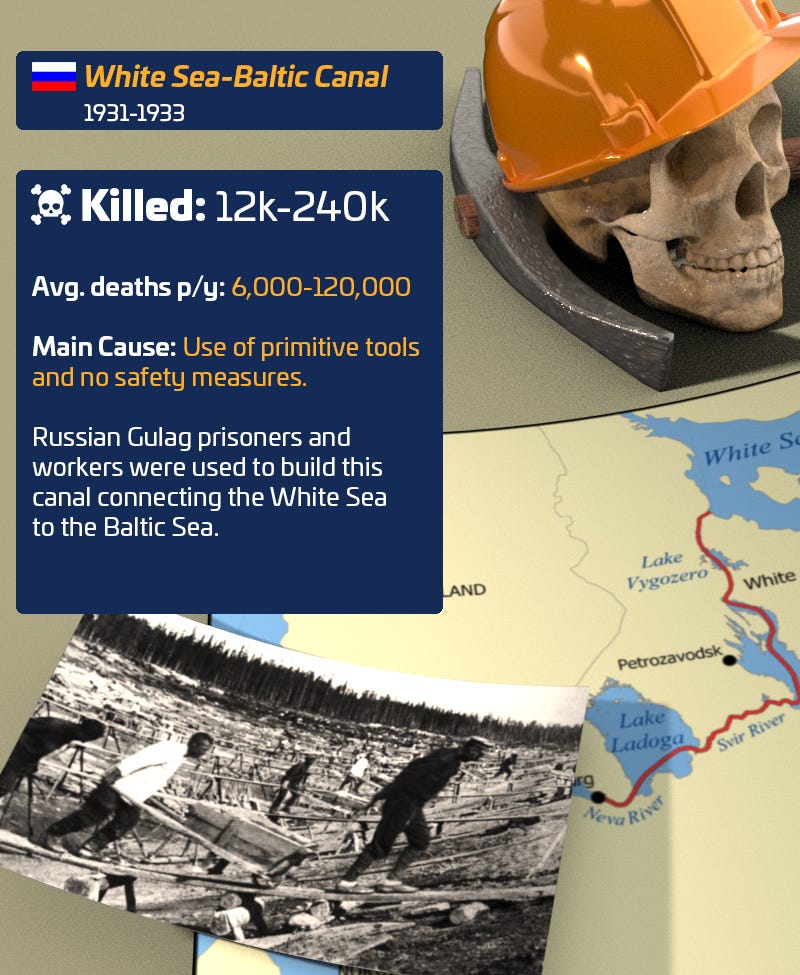 The White Sea-Baltic Canal, or White Sea Canal as it is often known, is a ship canal in Russia constructed in the 1930s by Gulag prisoners. The Gulag's were forced labour camps created during Lenin's time in power and reaching their peak under Stalin. Until 1961 it was known as The Stalin White Sea-Baltic Canal.

The canal is 141 miles long, running through several canalised rivers and Lake Vygozero. The canal was originally planned to improve trade and construction with the ability to move materials more efficiently. However, the water level is too shallow in many places to allow large boats to pass. Therefore, the canal still only carries light traffic of between ten and forty boats per day.

The Soviet Union constructed the canal as part of their infamous five-year plan. The canal was completed four months ahead of time in an attempt to show the efficiency and strength of the Soviet Union. The canal was the first construction project using the Soviet Unions forced labour from Gulags. The camps and prisons supplied 100,000 convicts and this was advertised as an example of using prisoners but also helping them 'reforge' - a Soviet concept of rehabilitation.

In reality though, prisoners survived in brutal conditions. Teams were forced to live in cramped, uncomfortable surroundings and competed against each other increasing working hours and the intensity of labour. 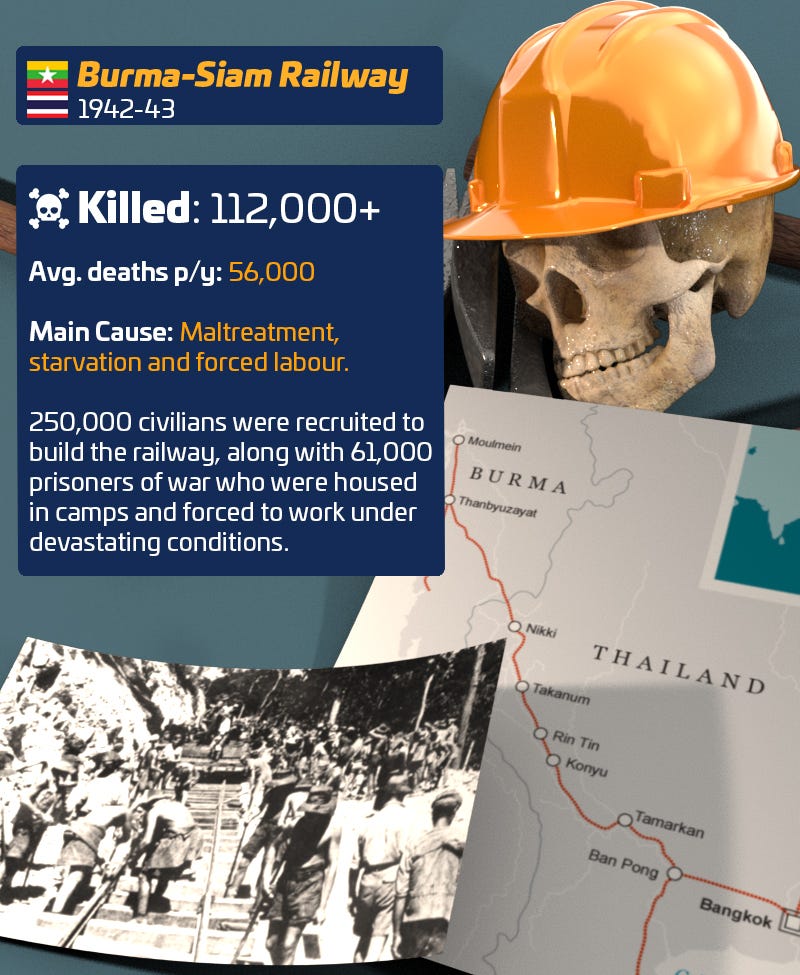 Also known as The Death Railway, The Burma -Siam Railway was constructed by the Empire of Japan to support forces in Burma during World War Two. A similar route was considered by the British government as early as 1885, but the terrain which was divided by numerous rivers, was considered too difficult to undertake.

In 1942, Japan seized control of the British colony of Burma and needed to supply troupes to the area. After the Japanese defeat at the Battle of Midway in June 1942, the Japanese government decided the railway was crucial to their success and therefore the risk of difficult terrain was worth taking.

Thousands of British and Australian POW were used to construct the railway, with 1,000 POW housed every five to ten miles on the route. The camps included open-sided barracks built on bamboo poles with bamboo roofs. 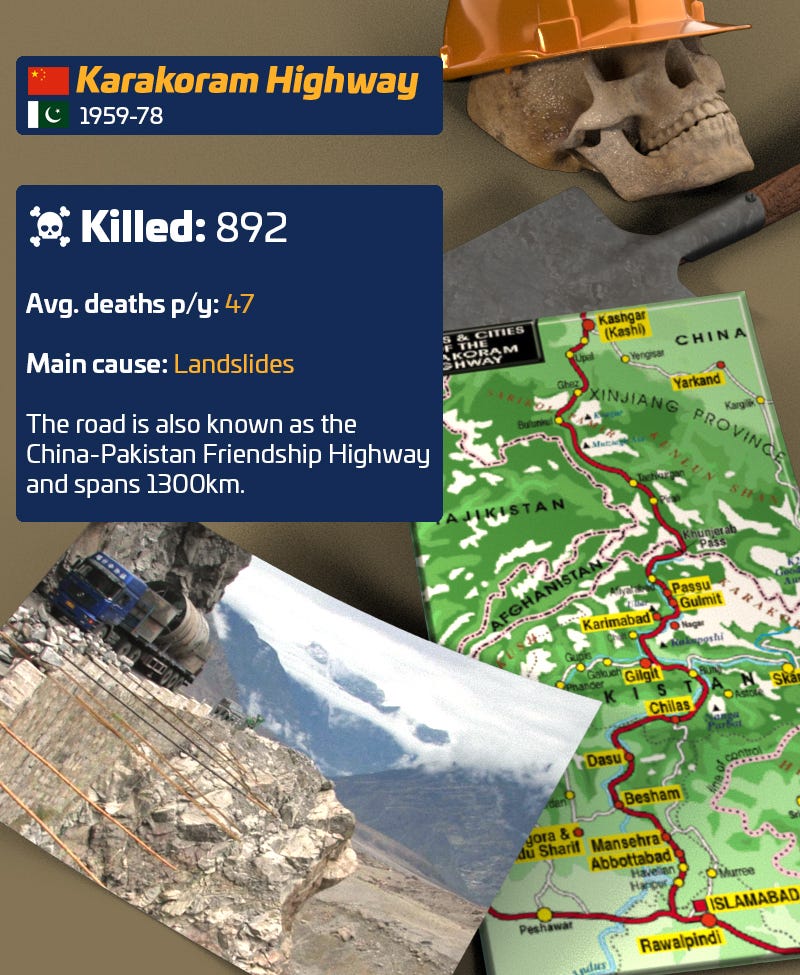 Also known as National Highway 35, the 1300km national highway in Pakistan extends to Hasan Abdal in Punjab, where it crosses into China. The highway is a popular tourist attraction, with one of the highest paved roads in the world.

The mountainous terrain of the road led to many difficulties during construction, including multiple deadly landslides which killed hundreds of workers.

Construction began in 1959 but realignment and the construction of tunnels around the highway continued until 2015. 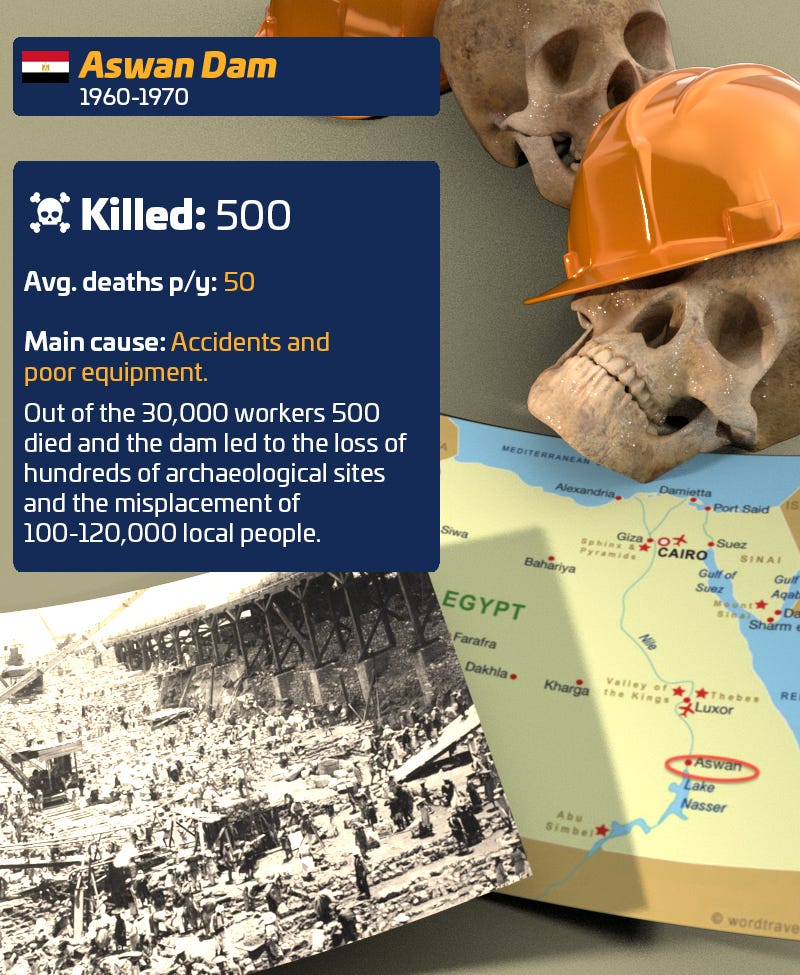 The Aswan Dam in Egypt was constructed after the Egyptian Revolution of 1952 to improve on the Low Aswan Dam constructed in 1902. The Dam would better control flooding and increase water storage for irrigation while also generating hydroelectricity. The dam was part of a wider plan of industrialisation.

Attempts to build dams at Aswan go back to the 11th century but the current dam was create in 1960-1970. 25,000 Egyptian engineers and workers contributed to the construction.

For the completion of the dam, 100,000 people were forced to relocate. During the work, 22 archaeological monuments were put in danger. Some were preserved or removed but the Buhen Fort, a ancient Egyptian fortress dating to 1860BC was flooded by Lake Nesser after construction of the dam.

Of the 30,000 workers, 500 were killed and their deaths were caused by floods, poor living and working conditions and the spread of disease.