Revealed: The UK's Most and Least Renter-Friendly Cities 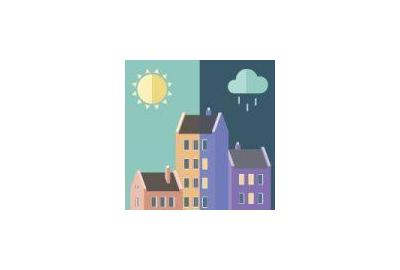 Posted in: Blogs
By Insulation Express
No comments

With private-sector renting prices hitting a record high just as the UK headed into lockdown, there's no denying that the current climate is a scary one for renters.

But regardless of whether you're renting for the long haul or just a short period of time, you'll no doubt want to live in a city that makes it easier for you.

So with this in mind, we have completed extensive research to uncover the best and worst cities for renters in the UK - whilst taking into account numerous factors, from annual rental price rises to the average percentage of income spent on rent, and more.

Want to see where your city is scored out the 'rent-friendly' index scale? Scroll down to discover.

Revealed: The Best Cities for Renters 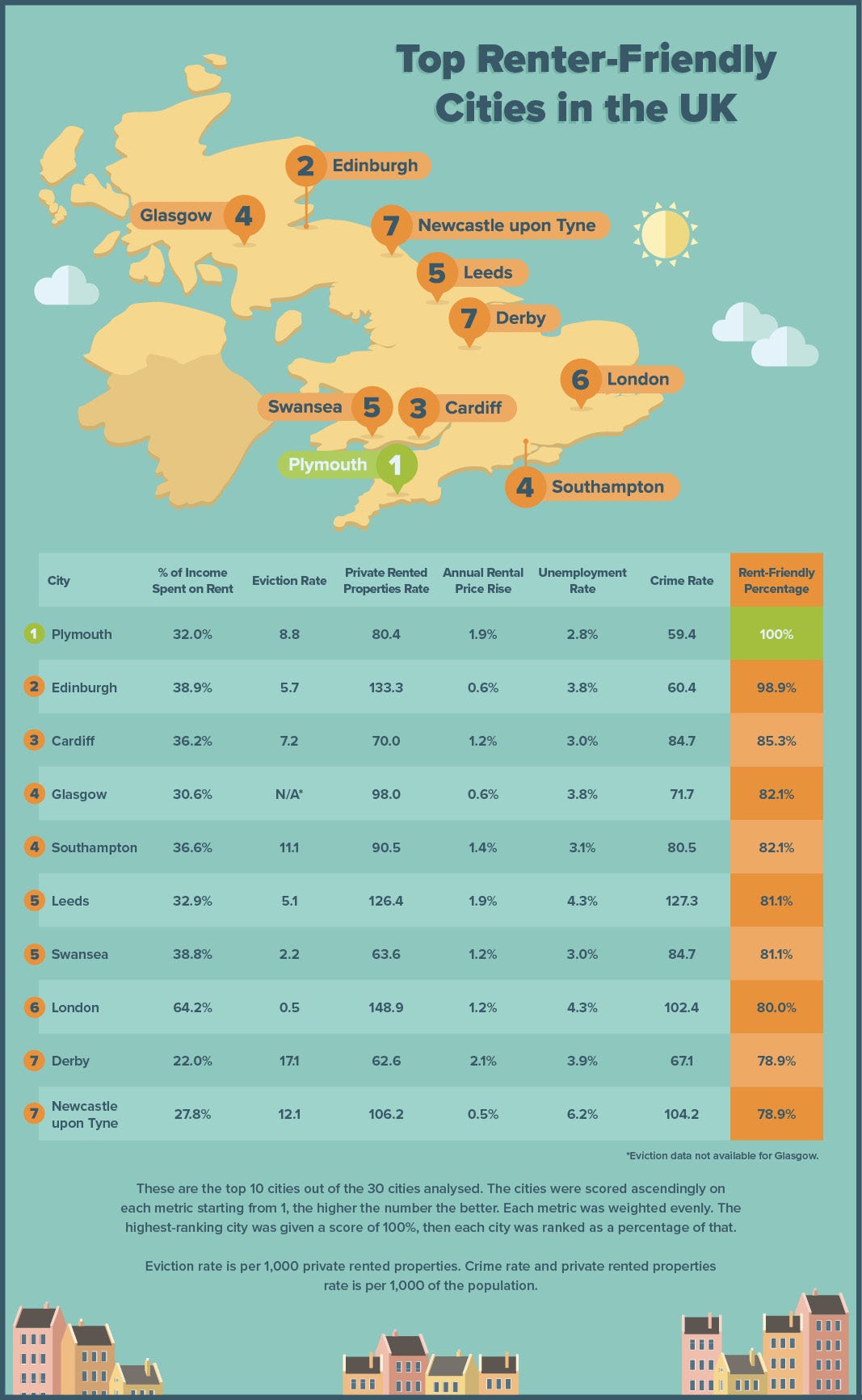 Plymouth is Crowned the Best City for Renters

Tenants in Plymouth can receive a first-class renting experience, as this city placed first in our analysis.

This is on the basis that Plymouth renters spend less than a third (32%) of their income on rent, which is shockingly half (64%) of what London pays.

What’s more, the unemployment rate in Plymouth is the lowest in the top 10 cities, at just 2.8%. Combining this with the fact that the crime rate is also the smallest of all 30 cities analysed - at just 59 crimes per 1,000 people - then it's no surprise why Plymouth really is the best city for renters. In fact, their crime rate is over a third less (38%) of that of the national average (95 per 1,000 people).

Edinburgh Narrowly Misses out on Top Spot for Renters

If you’re looking for somewhere more up North to rent, then Edinburgh could be your best bet. In fact, the Scottish capital just narrowly missed out on a first-place for renters, with an index score of 98.9%.

Our research revealed that renters in Edinburgh have a bounty of private rented properties to choose from – 133 per 1,000 of the population, which is 68 (per 1,000 people) more than the least rent-friendly city, Luton.

Although Edinburgh is known for its high private-rent prices - so much that the average renter will spend 39% of their income on it - it's unlikely to get much higher as last year, as last year, rental prices only increased by 0.6%.  Of the other 29 cities analysed, the only ones to see such a low figure were Glasgow (0.6%), Newcastle Upon Tyne (0.5%), and Sunderland (0.5%).

As part of our analysis, we also uncovered the third-best city for renters was Cardiff (85.3%) followed by Southampton and Glasgow who were placed in joint fourth place (both 82.1%)

Revealed: The Worst Cities for Renters 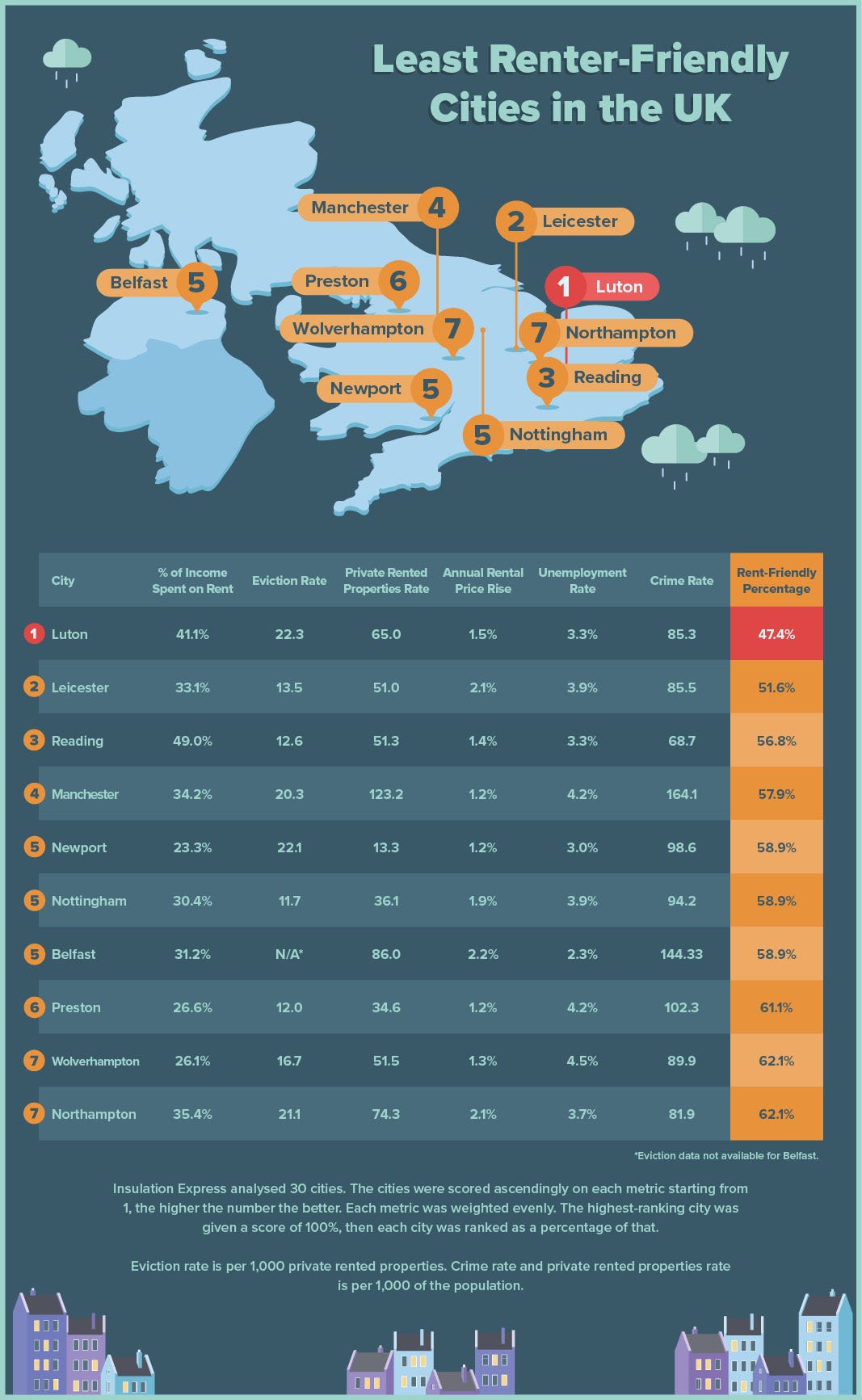 Luton is the Least Renter-Friendly City

Our data revealed that Luton is the UK’s least favourable city for renters, scoring just 47% in the renter-friendly index.

For starters, Luton has the highest amount of evictions out of the 30 cities analysed – racking up 22 evictions per 1,000 private rented properties. However, with housing charity, Shelter, revealing that anyone who spends 33% or more of their income on rent is deemed unaffordable - and the average renter in Luton spending 41% - this may explain why private-rented evictions are more common here than any of the other cities analysed.

Likewise, the price of renting in Luton has increased substantially over the last year at 1.5%. Comparatively, Newcastle and Sunderland have the lowest annual rent rise at 0.5% - which is 66% lower.

Our index has uncovered Leicester as the second most unfriendly city for renters, gaining 51% in the 'renter-friendly' analysis.

In addition, Leicester is home to one of the second-highest rent price hikes in the past year, at 2.1%, just missing the highest price hike as seen in Belfast (2.2%).

Additionally, tenants here face an uncomfortable unemployment rate at 3.9%, which is one of the highest of the cities analysed.

To avoid significant financial strain on tenants, Shelter recommends spending no more than 33% of your income on rent. Anything over this is ‘unaffordable’ and anything over 50% is ‘extremely unaffordable’.

So, based on this analysis which cities are deemed unaffordable?

Renters in London face the most crippling rent prices, with rent eating up 64% of an average Londoner’s salary. To put that in perspective, tenants in London just have over a third (36%) of their wage left to spend on food, bills and personal spending.

However, 40 miles outside of London in Reading this drops to 49%, which is 15% less than what Londoners are spending of their income on rent. While considerably less of a financial strain, this is still a huge pressure on finances for Reading renters. As opposed to tenants in Nottingham who spend 17% less of their wage on rent, at 30.4%.

In addition, Insulation Express also uncovered which cities spent the least amount of their salary on rent. The results are as follows:

Our research uncovered that Derby is the most affordable city for renters. Tenants in this city spend just 22% of their salary on rent, leaving them with over three quarters (78%) of their salary to spend on remaining bills and personal spending.

The northern city, Sunderland, takes second place for the cheapest city for renting. Rent here consumes only 23% of renters’ salaries. Both Stoke-on-Trent and Newport, score third and fourth lowest priced city for rent.

Uncovered: Luton Has the Highest Number of Private Tenant Evictions

Unfair evictions are still a common problem British tenants face, putting renters at risk of becoming homeless. We, therefore, uncovered which cities have the most evictions:

As well as Luton being the worst city for renters, the city also takes the title for the highest number of tenant evictions. In the past year, Luton’s private landlords filed for 22.3 evictions per 1,000 private rented properties in the area.

By comparison, London has the lowest amount of evictions out of 30 cities analysed. London has just 0.51 evictions per 1,000 properties. Additionally, Swansea, Leeds and Sheffield are the second, third and fourth lowest cities for evictions – with 2.2, 5.09, and 5.11 evictions accordingly.

While renting can be costly, you could save a considerable amount by sharing with a tenant. And you could save even more if you lived in the most affordable city – Derby. However, if you’re looking for a city that’s an all-rounder to rent in, then the most rent-friendly city, Plymouth, may be your best option.